Just finished cranking out some crosstabs for my coauthor Seth McKee at Texas Tech, and thought I’d share the actual age breakdown of the 2014 Florida electorate. Let’s just say Florida’s voters were A LOT older than the official exit poll suggests.  Here’s CNN’s exit poll estimates for voters, by age, in the 2014 General Election: 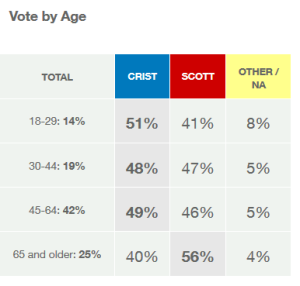 So, does the exit poll over-estimate the turnout of 45-64 year olds? Actually, no.  According to the official voter file, less than 40% of the actual Florida electorate was in that age bracket, less than the exit poll estimate of 42%.

How is this possible?

The  generation gap is alive and well in Florida, especially with regard to turnout in midterm elections, a fact missed by the 2014 General Election exit poll.