Check out my report for the ACLU of Florida,  “Vote-By-Mail Ballots Cast in Florida.” Vote-by-mail ballots cast in the 2012 and 2016 general election had a higher rejection rate than votes cast at assigned precincts on Election Day and at early voting sites, and more importantly, younger voters and racial and ethnic minority voters were much more likely to cast mail ballots that were rejected and were less likely to have their ballots cured.

The precincts below have at least 100 Hatian-born naturalized citizens who voted in the 2016 General Election, and at least 50% of those who turned out in the precinct are black (according to the statewide voter file). Most of these heavily Haitian precincts are in Miami-Dade County, but several others are in Palm Beach and Broward counties. There are even a couple in Orange County. Despite having druthers over (or downright anger towards) the Clinton Foundation and its overt meddling over the years in Haitian elections and ineffective disaster relief, every one of these heavily Haitian precincts went heavily for Hillary, most with well above 80% of the two-party vote.

Republican gubernatorial candidate Ron DeSantis’ comment, that Florida shouldn’t “monkey this up” by electing Democrat nominee, Andrew Gillum, only adds to the pile President Trump started when he referred to Haiti and some African nations as “shithole countries.”

Although the Anti-Trump vote looms large in Florida, with some independents and Republicans experiencing buyer’s remorse, mobilization of younger people of color remains the key for any prospects of a Blue Wave in Florida. 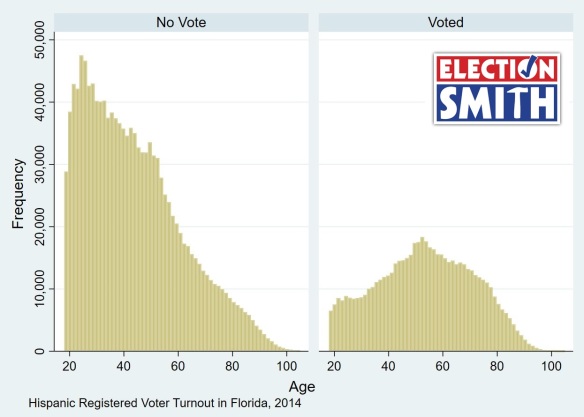 If Democrats–from Bill Nelson and Andrew Gillum on down–are going to win in Florida, there needs to be massive GOTV to mobilize younger minority voters to the polls.

In the 2016 General Election, younger African American registered voters in Florida didn’t turn out to vote. For Andrew Gillum to have a shot at winning in November, that has to change.

Here’s a plot of the count of registered black voters in Florida as of December 2016, by gender (excluding those with missing data).

But when it comes to turnout, in the November 2016 election younger (18-26 year olds) black registered voters–male and female alike–were much more likely to stay home than go to the polls than older African Americans in Florida. 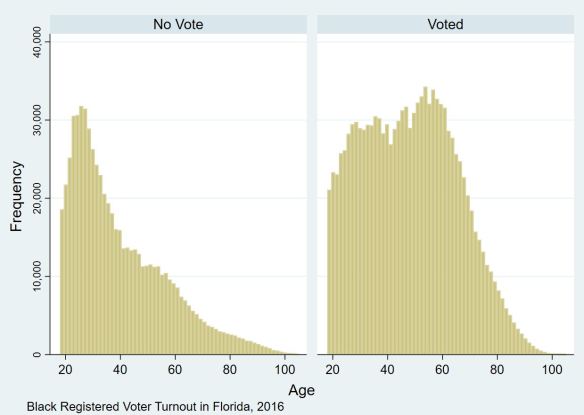 We’ll see if these distributions continue this coming November with Andrew Gillum on the ballot. The 2018 gubernatorial race in Florida is all about mobilization of the base.

Proud to have served as an expert in the case, working with an outstanding coalition of voting rights organizations.