“Residual Votes in the 2020 Election in Georgia”

The 2020 General Election took place against the backdrop of a pandemic and numerous claims about incipient voter fraud and election malfeasance. No state’s presidential race was closer than Georgia’s, where a hand recount of the presidential contest is planned. As an initial post-election audit of the 2020 election in Georgia, we analyze residual vote rates in statewide races. A race’s residual vote rate combines the rates at which ballots contain undervotes (abstentions) and overvotes (which occur when voters cast more than the allowed number of votes in a race). Anomalously high residual vote rates can be indicative of underlying election administration problems, like ballot design flaws. Our analysis of residual vote rates in Georgia uncovers nothing anomalous in the presidential race, a notable result given this race’s closeness. We do, however, nd an unusually high overvote rate in Georgia’s special election for a seat in the United States Senate. This high overvote rate is concentrated in Gwinnett County and appears to reflect the county’s two-column ballot design that led roughly 4,000 voters to select more than one candidate for senate in the special election, in the process rendering invalid their votes in this contest.

The full paper is available here.

Nate asks, “So how much did turnout contribute to Mr. Trump’s victory? As the party registration numbers and turnout figures by race imply, just a bit. But Mr. Trump won the election by just a bit — by only 0.7 percentage points in Pennsylvania, for example.”

Let’s take a closer look at the precinct results in Florida.

Trump also crushed Clinton in precincts that had high rates of Whites voting on Election Day. The figure below reveals that Trump won bigly in precincts in which Whites comprised more than 65% of those who waited until Election day to turn out (precinct size is weighted by Election Day Turnout). 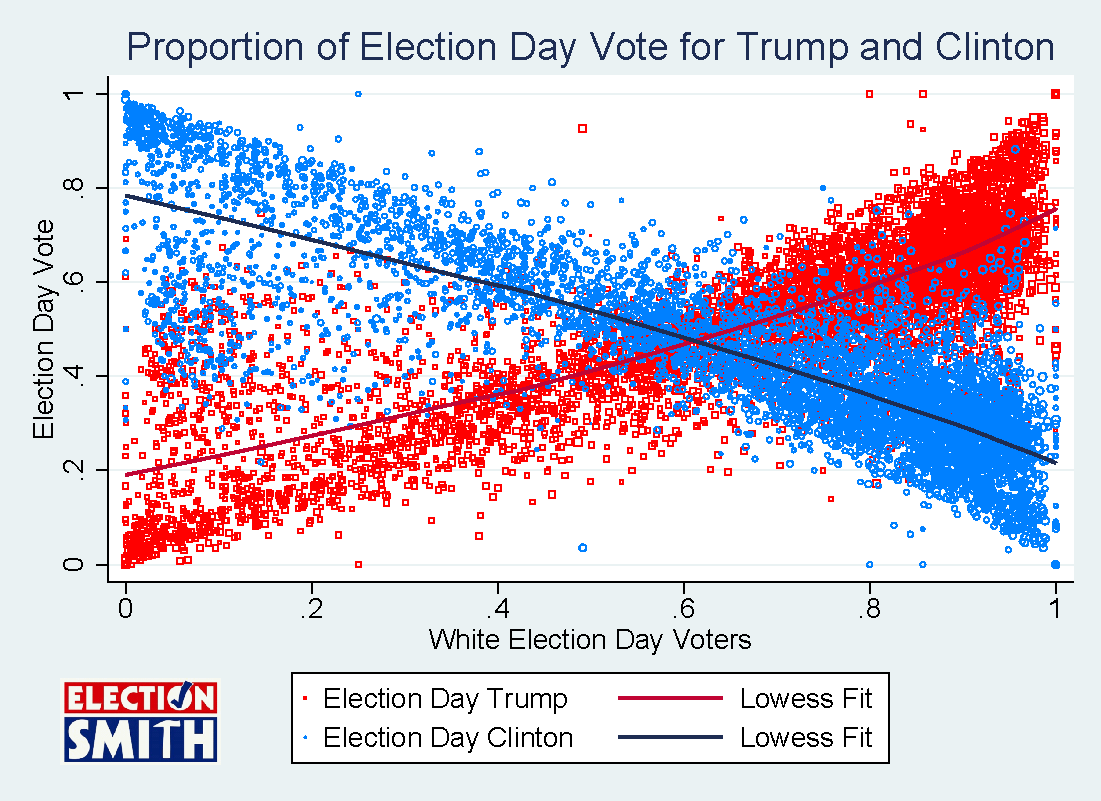 So, it appears that that Trump did well in Florida not only in precincts with high voter turnout, but also in those where White voters turned out on Election Day.

Here’s a link to the on-line version.

Despite the expansion of convenience voting across the American states, millions of voters continue to cast ballots at their local precincts on Election Day. We argue that those registered voters who are reassigned to a different Election Day polling place prior to an election are less likely to turn out to vote than those assigned to vote at the same precinct location, as a new precinct location incurs both search and transportation costs on reassigned voters. Utilizing voter file data and precinct shape files from Manatee County, Florida, from before and after the 2014 General Election, we demonstrate that the redrawing of precinct boundaries and the designation of Election Day polling places is not a purely technical matter for local election administrators, but may affect voter turnout of some registered voters more than others. Controlling for a host of demographic, partisan, vote history, and geospatial factors, we find significantly lower turnout among registered voters who were reassigned to a new Election Day precinct compared to those who were not, an effect not equally offset by those voters turning to other available modes of voting (either early in-person or absentee). All else equal, we find that registered Hispanic voters were significantly more likely to abstain from voting as a result of being reassigned than any other racial group.

Here’s the link to the pre-publication draft.